Secrets of an Alpha Dog

Have you ever heard that you have to be the Alpha Dog to get your pet to do what you want?

There might be some truth to that. You do have to show that you can be a good, fair, gentle and confident leader.

A leader capable of defending and protecting the family from any danger (real or perceived), providing shelter, roof and security. A leader that is more like a parent than an absolute ruler. Who wouldn't follow a leader like that?!

In this article you will find out about misconceptions and where they came from and how to be the best parent/owner to your pet dog. 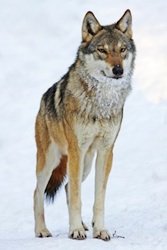 In 1970 Dr. David Mech published his book "The Wolf: Ecology and Behavior of an Endangered Species". This book was based on observations of wolves in captivity in which he described how Alpha wolves had to fight for their status with aggression. This was because wolves strange to each other were put together in close proximity, a very unnatural situation to be in.

Almost 30 years later Dr. Mech published a scientific articled about wolf behavior in the wild. In nature, wolf packs are mostly families. A male and female breeding pair that produce many pups. This family unit, the pack, does not need to fight for an alpha position. The parents, naturally, take charge and keep the family safe.

For 30 years many dog trainers have justified their often brutal and inhumane practices with the wrong knowledge. Stop trying to be an alpha dog! Today we know better, so spread the word!

Hear Dr. Mech himself telling you the story!

Like the title of the article says, let's call it a male or female parent.

Parents are natural leaders. They do not need to assert their authority all the time because nobody is trying to take it away from them!

I have heard many ways in which you can let your canine friend know you are the alpha or dominant individual. Let's look at them more closely:

Alpha dog theory is no longer widely accepted. Treat your canine companion with respect and you will gain his in return.

Don't be an alpha dog!

Be a confident leader instead...be a parent to your dog. What can you do to keep your dog obedient and happy at the same time?

Here are a few suggestions and ideas:

This is not a command, but something you will teach your pet do every time he finds himself in a situation he should ask permission before proceeding. This is one of the most important things you should train your furry friend to do!

Avoid putting him under threatening or uncomfortable situations. For example: If you know your dog is uncomfortable with kids, ask kids to approach slowly, with treats in their hands. Let them know that it is NOT OK to hug him. If you see a kid running towards your pooch step in between, let the kid know that they should always ask for permission before petting a strange dog.

Obedience training will greatly enhance your animal-human bond and communication. This will make your dog more confident and you will earn his respect.

Here are a few recommendations: "How to train a reliable command" and "Training your dog to sit"

Your young pet needs plenty of exercise. Both physical and mental! Take your dog for walks every day, visit the park. If you have a backyard use it to play games like fetch. If you must leave your dog alone at home for several hours every day, try puzzle games (these are toys that can be filled with food and the dog has to work it's way to get the food out of it!)

Many behavioral problems start because your dog is sick or in pain. Even if you can't see signs of sickness always check with your Vet. For example, most cases in which owners can't seem to potty train their puppy happen because the dog has a urinary infection. I have seen this happen many times with my clients. As soon as the infection is cleared, potty training is a breeze!