Extinction
How to get rid of problem behaviors in dogs

Behavioral extinction is a learning principle that can be very helpful solving some dog behavior problems like: Jumping on people, begging at the table, pulling on the leash and whining when placed inside the crate.

It is important that you understand how it works, because although it seems like a very simple concept...

...there are some things you need to know or you will be teaching your pet the opposite of what you wanted her to do!

Extinction is a psychology term to explain how we can learn something new about a situation. It is not the same as forgetting though, and that is why you will learn that the animal can reverse to the undesired behavior sometimes.

When you stop reinforcing a behavior, the behavior fades away.

For example: if your dog begs at the dinner table (with a cute puppy face) but you stop giving food to her (no matter how cute or sad he looks) eventually she will stop begging.

I emphasize the word "eventually" because this takes time. It will take even longer if your pet has been rewarded for begging (or jumping or anything else) for a long time! 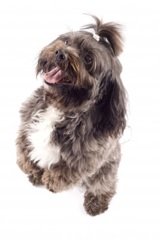 Even though the concept is simple, "stop reinforcing the bad behavior", in practice it can get tricky for several reasons:

What is the reinforcer?

If a behavior happens frequently it's because it is being reinforced. In some cases it is obvious what the reward is, for example, begging at the table. All you have to do is stop giving your pet food at the table.

Other cases are not that obvious, for example jumping on people or barking.

When dogs jump on people they want attention. Most dog owners think attention is talking and petting the dog. However to the dog attention is any kind of interaction: eye contact, pushing away, kneeing the dog or yelling NO! (even if negative, these are types of attention). So, to extinguish a jumping behavior you must completely ignore your pooch! No eye contact, no touching of any kind. The person must look away, turning around if necessary and keep his/her arms folded.

When dogs bark it could be for many reasons, most of which we can't see (or hear). Some dog bark because they are bored, so the act of barking is reinforcing in itself! Which means you can't extinguish it! (because the reinforcement is an internal emotion of the dog). In this case you can try distracting the dog or teaching him other ways to pass the time.

In summary, when extinguishing a bad behavior you first need to find what the reward is. Then, if possible, remove it completely.

Beware of the "BURST"!

When you first take away the reward the dog will try even harder! (For example: he will start pawing at you or barking!)

That is called an Extinction Burst and I am sure you have experienced it yourself!

For example: You go to work every day, take the elevator to your office and every time you push the button to your floor, the doors close and the elevator goes up. Right?

One day, you go to work, get into the elevator and press the button...but nothing happens, the doors remain open!

What do you do?

You actually push the button again....and again...and harder this time!

Until eventually you give up and take the stairs.

When you are trying to extinguish a behavior...stay focused through the burst! Don't let your dog win!

What happens if you give in once in a while?

Now your canine friend will learn that sometimes she will get the reward. So he will keep trying, because...

...you never know...sometimes it works!

This is how slot machines work...people keep trying because sometimes you win! To get your dog to STOP doing a behavior you don't like you have to be strict and consistent. No food at the table period.

Extinction is not the same as forgetting. When you (or your pet) forget something, it means the memory faded away. During extinction there is new learning, but the old memory is still somewhere in our brains.

When you start extinguishing a behavior you will see the dog getting better during one training session (which can last several hours in the beginning). When you come back the next day though, your dog's first trial will be so bad it will seem he didn't learn anything the previous day!

Eventually with many training sessions, the bad behavior will become less and less prominent until one day it will be gone.

The articles "Training a reliable dog behavior" as well as "how to use dog training treats the right way" explain that when training a behavior it is important to reward your pet randomly. This keeps the pet guessing and trying harder, which eventually makes the behavior reliable and strong (even without treats).

Unfortunately, if a behavior has been reinforced in this way (randomly), then it becomes really hard to extinguish it. This is because the pooch already knows that sometimes doing the behavior doesn't pay, he has to keep trying.

The solution is the same: be consistent, patient and keep on training.

When do I use behavioral extinction training?

Every time you want a behavior to go away.

Now that you know how to get rid of bad behavior learn some positive training methods to teach your canine friend good ones!

Home > Dog Training Methods > Extinction: How to get rid of problem behaviors in dogs