Dog training verbal commands are words we use to ask our pets to do something. They are easy to teach to your canine friend and can be useful when your hands are occupied or if your pet can't see you.

Dog verbal cues can be taught to your pet as you reward a specific behavior. For example, you can say "settle" as soon as (or even before) your dog calms down; after he does it reward him with a treat.

If your dog responds very well to hand signals, these can also be turned into verbal commands. Repetition is the key to help a dog understand human words. Your dog can understand both hand and verbal cues.

Dog training verbal commands can be in any language. Sometimes this helps dogs understand them better because they are words that happen only when we are talking to them. 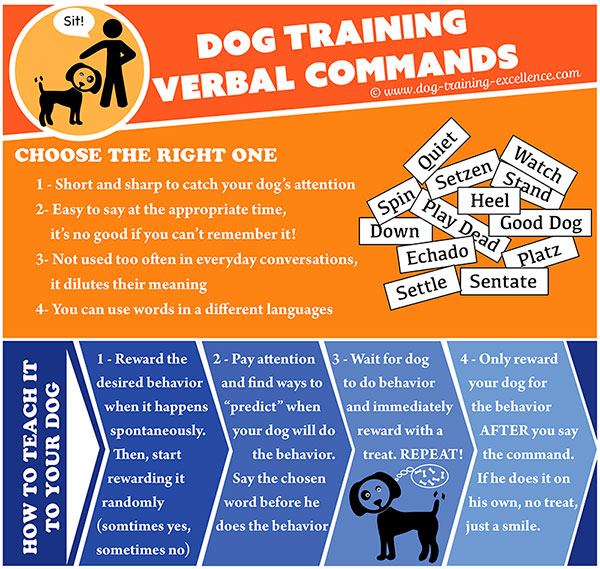 When you choose which word to use for an obedience command, follow these tips.

You will be applying the principles of Operant Conditioning!

A behavior will happen more often if it is being rewarded. And your command should act as the "green light" for your canine friend to do the behavior and get rewarded.

If your pet already responds to a dog training hand command, adding a dog verbal cue is easy:

If you are training a new behavior and want to add a dog verbal cue follow these steps:

When you start teaching your furry best friend the meaning of a word by following the above steps, DO NOT repeat the word more than once! Be patient and give him the chance to respond before you ask again. Count to 10 in your head if you have to!

If you ask your pet to sit sit sit! he will only learn that sit, doesn't mean anything...but sit sit sit! means sit!

Dog training verbal commands will improve your communication with your pet.