Let’s say it again: Operant conditioning...
What does that mean? … It means learning (conditioning) that -what I do- (operant, as in operator) has a consequence. You might have heard about positive vs. negative training methods, or using reinforcement or reward vs. punishment.

All training methods, no matter how they call them, are based on the principles of classical and operant conditioning. Both punishment and rewards are an integral part of this theory that explains some of the most basic ways of learning, and it applies to all of us, animals.

When you learn the psychology behind dog training through operant conditioning examples you will be able to more effectively teach your pooch to do what you ask.

Let me tell you a little extra secret too: this concept will also become handy when dealing with unruly kids, a difficult mother-in-law, a messy husband/wife or a misbehaving cat! It is basic animal psychology and that is why it applies to all species.

Dog trainers and people in general use the term “positive” to imply that they use rewards as the main dog training technique. They use “negative” to imply an obedience method based on corrections.

But the reality is that both groups will use “positive” and “negative” along their training history with their dogs. Here is why...

Operant conditioning is how we learn to associate our own behavior with a consequence.

Let’s break those 4 possibilities down into their basic components.

Positive means to give (i.e.: give a treat, give a jerk on the leash).

Negative means to take away (i.e: take away your attention, take away the pressure on a choke chain).

Reinforcement means that the behavior will happen more often.

Punishment means that the behavior will happen less often.

Reinforcement and punishment are defined by the outcome! 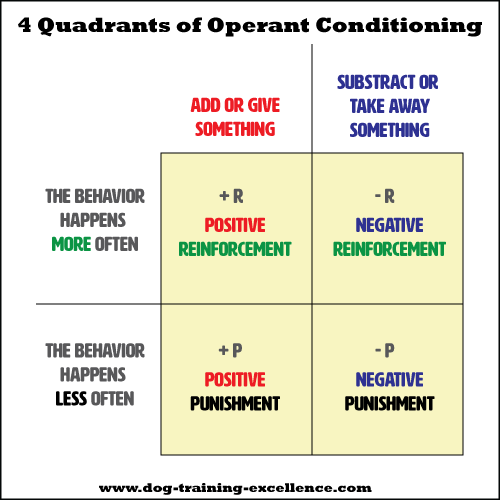 The four possibilities are often explained using this 4 quadrant chart.

Here is an example:

You give (positive) your canine friend a pat on the head (reinforcement?) every time he sits next to you. So you can assume that is “positive reinforcement”

You notice that your dog does not sit next to you more often, it actually happens less often!
You rewarded him with a pat! why isn’t he sitting next to you? …

… because the pat on the head was not a reward for him. He actually hates when you pat him on the head! (some dogs really do, if this is your case, rubbing down the chin is better).

So, you did give (positive) him something - the pat on the head - BUT there is a behavior that happens less often (punishment).

A reward is only a reward if the animal increases the likelihood of the behavior!

An aversive event is only a punishment if the animal decreases the likelihood of the behavior!

To help you understand the four possibilities use the following "No Jumping" example and think - What option am I using?- with everything you teach your furry friend! 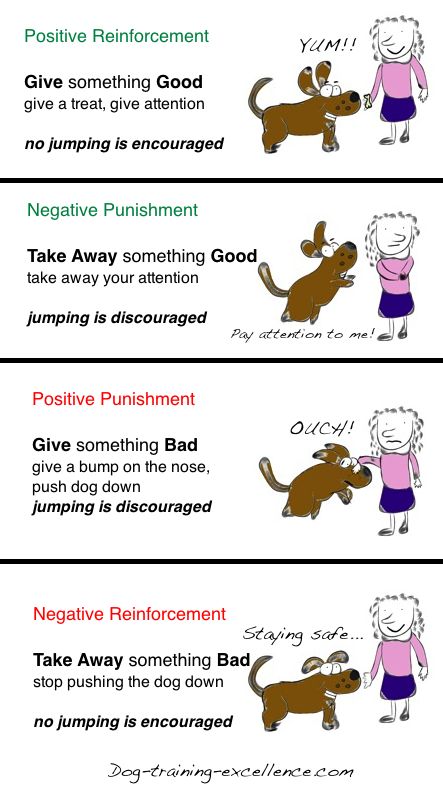 If you are following this so far, you will come to realize that these 4 possibilities are often different sides of the same coin. For example, a dog barks at the dinner table begging for food, the owner gives the dog food. What is going on?

From the point of view of the dog, he was given (positive) food for barking, so in the future it is very likely that he will continue barking for food at the table (Reinforcement).

On the other hand, from the point of view of the owner he hated the constant barking but as soon as he gave the dog food, the barking stopped (negative), so it is likely that the owner will continue giving food to the dog at the table to keep him quiet (Reinforcement). You see? you have two events happening simultaneously but they are two different squares of the quadrant.

It all also has to do with how you phrase things because a dog that barks less often (punishment: behavior decreases) is also a dog that is quiet more often (reinforcement: behavior increases).

Also, the way each possibility is defined depends on the timing at which the punishment or reward are given. If you give it late, you might be rewarding/punishing something completely different from what you thought you were. In the example above, if the owner chooses to give food when the dog is quiet instead, then the quiet behavior will increase instead. 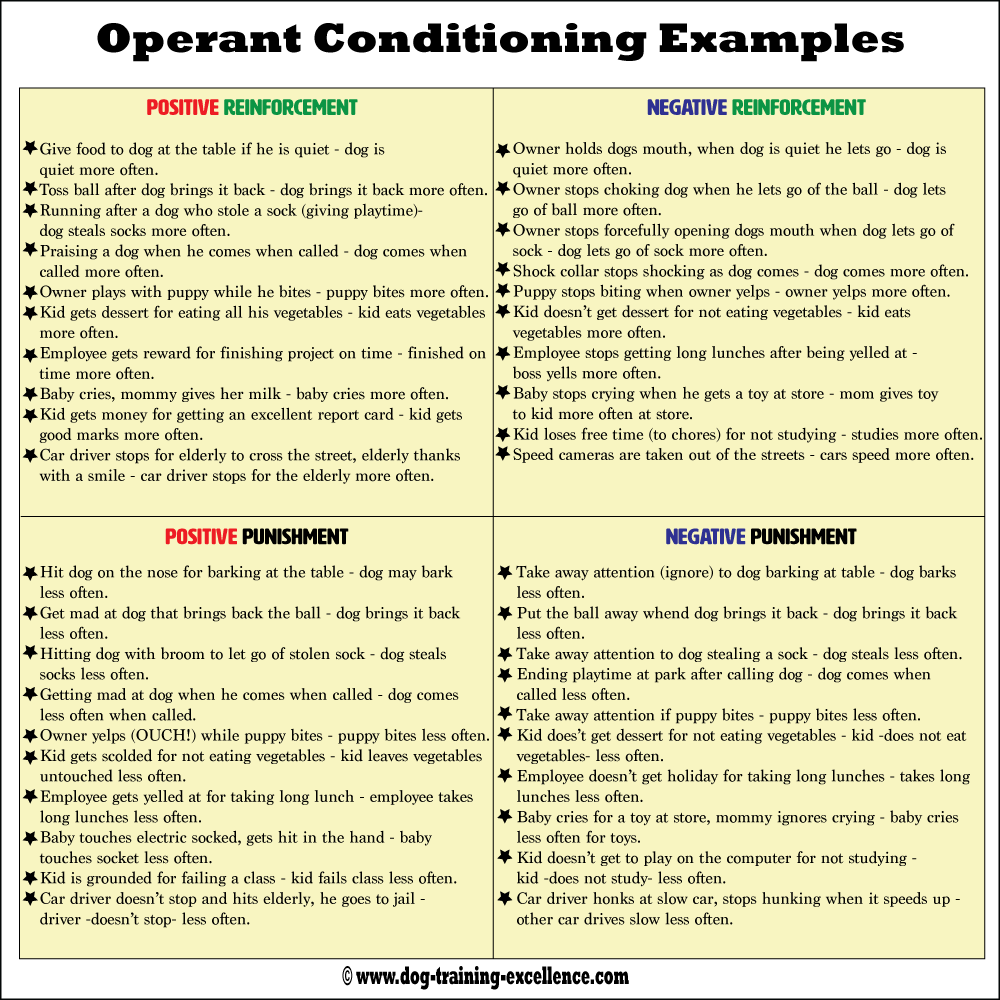 This are made up examples, you can see how you can probably sort every action you do and its consequence in one of these 4 operant conditioning quadrants

You could use either of the 4 possibilities of Operant Conditioning.

The idea is to use the most effective one for each particular behavior.

I personally discourage dog parents and trainers alike to rely on positive punishment.

If you are interested in learning more about learning principles I highly recommend these 2 books. They are written for you and me (dog trainers and dog owners/lovers). These books skip all the hard-to-remember jargon of textbooks and still teach you everything you need to know...and they are fun to read too!

What about dog commands?

Up until now I gave you information on how to make your dog do a behavior more or less often.

...You want your dog to do the behavior on command only?

Well, here is the secret:

The principles of Operant Conditioning also work with a "Red light-Green light" system.

Tips to teach your dog a command

I will be helping you every step of the way as we learn how to teach your dog some basic commands. I promise that with practice, operant conditioning, will become second nature to you!

Now it's time to learn about Extinction and how it can help us get rid of problem behaviors! Click to learn more!